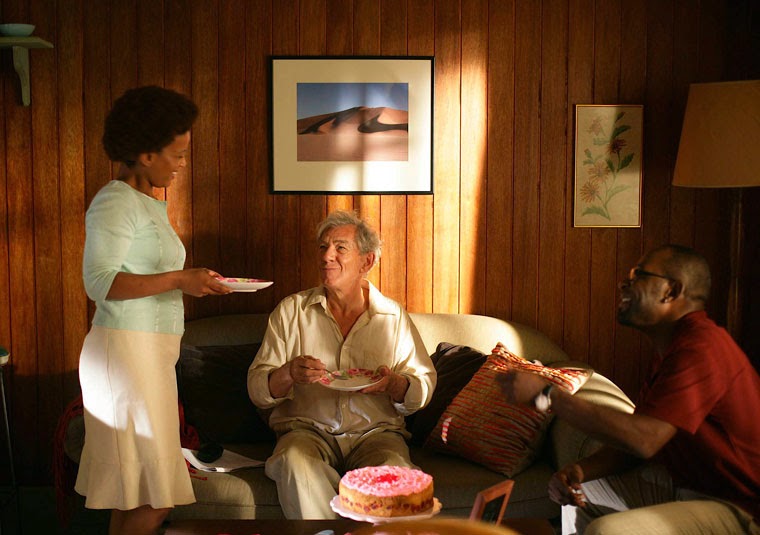 This is Un-Two, a man with no number, yet he reminds 147 of Two. He could be a two double, that would be a great job. 147 asks him if he could do a Two impersonation, by saying something in the Two vein. Un-Two tries to prove that he is Two. 1891 agrees that Un-two does look a bit like Two, but he doesn't have those death cold eyes that Two has!
This scene from Schizoid with the dishevelled Un-Two in 147's house eating cherry cake, put me in mind of the Prisoner as a raggedy man who sits in Mrs. Butterworth's house eating sandwiches and cake during 'Many Happy Returns.' Just a minute, they changed the picture on the wall! 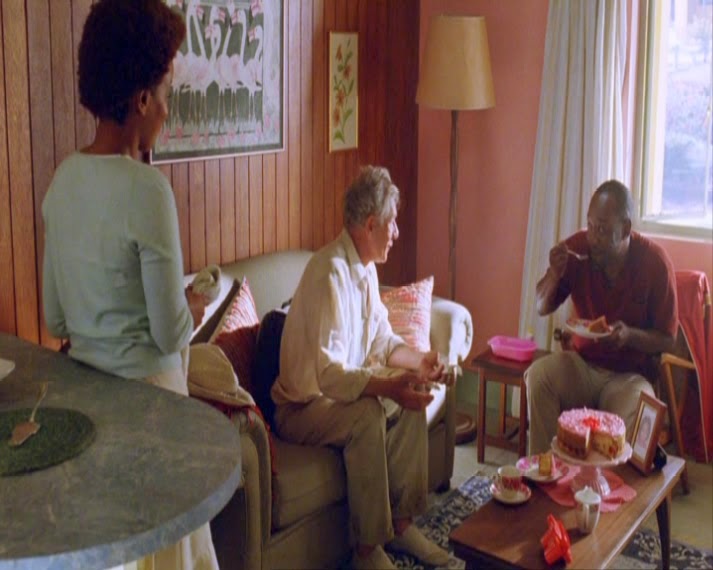 
I was wondering that if two times Six and Six are one and the same, how come Six has the cut on his cheek? Obviously it's to help the viewer identify between the two, but all the same Six would have had to cut himself. and it must have come as quite a shock for Six to discover that he helped create The Village, that he is responsible for sending all those people to The Village, even if it was inadvertently.
In the church when Six discovers Two just sitting there, Two wants Six to kill him, No.6 couldn't do it, and neither it seems could his predecessor! Because this scene is obviously acknowledging the scene from 'Once Upon A Time' when Number 2 wanted Number 6 to kill him. And I liked the way Two looked up at the Penny Farthing hanging from the ceiling in the Go Inside Bar, and gave a slight chuckle. Two paying homage to the past, to what once was? I think so.
Two, or was it un-Two, got a slice of his favourite cherry cake again. He enjoyed a cigarette with the Shopkeeper, and told 147, the taxi driver that he had no number, that he was a numberless traveller. This I think, was Two demonstrating the eccentric side to his character, and he knew what he was going to do, as the message regarding anyone going about impersonating Two, should be reported immediately as they are a danger to The Village. And that's what the Shopkeeper did, both when Six came to see him about the receipt, and after he had shared a cigarette with Two. On the telephone immediately to report to Two at the Clinic. This is another homage paid to the original series, as when the Shopkeeper in Hammer Into Anvil, reports the activities of No.6 to No.2. And since when was Two driven about in a Bentley convertible? One of his Guardians was going to drive Two in the car, but Two said "I'll walk today," Two riding in the Bentley convertible, something we obviously haven't been privy to! And there are no knives sold in The Village, such tools must still be against the law!

Homage continues to the original series in a couple of scenes, the church scene between Two and Six, and the times when the shopkeeper gets on the telephone to report the activity of Six, and later Two. But when the shopkeeper telephones the Clinic to report the man who is impersonating Two, whose voice does the shopkeeper hear? After all Two has just left his store..........probably a pre-recorded voice message made by Two before he left the clinic. The same way we see Two out and about The Village when Two is making his announcement about those who go about impersonating Two, that they are a danger to The Village!

So, if Six and Two times Six can be one, they can defeat Two.........and that could have been the case in the original series when I think about it. The two Six's become one, and gain ultimate power over The Village......I wonder how many Twos there have been since 1968, more then I've had hot dinners I shouldn't wonder!
You know............even though Two has deathly cold eyes, there are times when I look and see.......pain in Two's face. Pain? Yes, the pain he feels at having to keep his wife in an hallucinating, sedated state of mind, and all for the well being of the Village, and the community at large. Two must at times, suffer for that, even though he rarely shows his pain. No-one gets close to Two, unless Two wants them to!
When it became the case that Six had a double, I predisposed that his name would be Curtis, I was wrong.............And when it was said that Two had an alter ego, I thought there would be Two Two's, Two and an un-Two as Two called himself. And that's the point, there never was an un-Two, both Two's were one and the same, "One of number Two's little games," it was once said. But then when we had two shopkeepers, I thought it was being taken too far. But no, they went one step further than one step too far.....the shopkeeper was existing in two places at the same time. In the Store in The Village, and as the "access man" in the basement of the Summakor building! Twins, doubles, I'll just have a large one!

It is, as it is, as it should be
Be seeing you
Posted by David Stimpson at 09:40