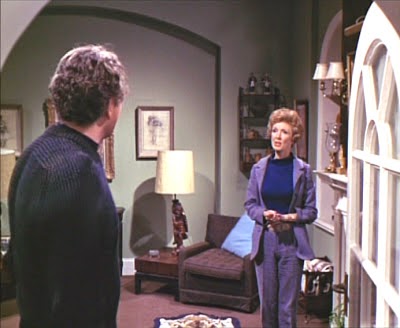 “Mister Smith you mustn’t, you mustn’t go like that.”
{Mrs Butterworth -  Many Happy Returns}

Mrs. Butterworth is extremely concerned about Mr. Smith leaving her house in his raggedy-man state. She is also concerned as to how he’s gong to get about. Lucky for the Prisoner that Mrs. Butterworth’s husband is the exact same size as him! Her concern appears to be genuine, but for him, or herself? After all what’s it to Mrs. Butterworth how Mr. Smith goes and gets about?
But of course Mister Smith mustn’t go like that. When he’s washed, shaved, and wearing a clean suit of clothes, perhaps he should’ve helped himself to some of those crisp $50 bills he has stashed away in the wall safe behind the television set!