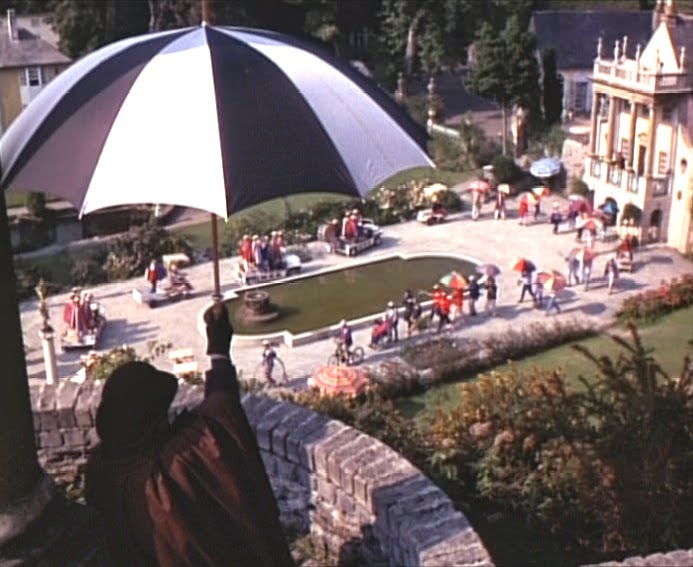 Well everyone outside is supposed to be having a good time, although at this distance it's difficult to tell! But taking a much closer look at the faces of all those at the Carnival, you see their expressionless faces. The joy, the cheering is all manufactured, as the citizens remain silent. 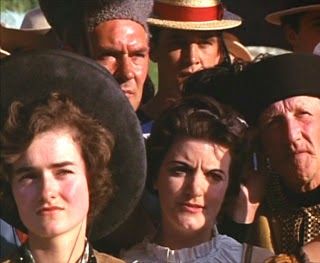 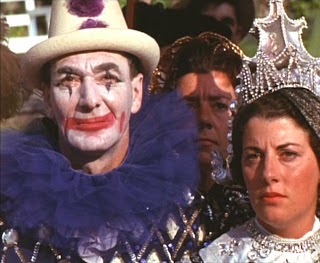 Just look upon some of the faces, are they cheering? Do they look happy? No, in fact the cheering we hear is piped through the Village public address system! It is all put on, all for show, like almost everything in The Village, is it another manipulation of the people. I doubt even the Brass band is playing, only the thump, thump, thump of the big bass drum beating out a rhythm.

The citizens, they parade around the central Piazza, and down the steps to the lawn, waving their coloured flags. Originally the script called for the flags of all nations. But in the end they settled for plain coloured flags. I mean to say, what would citizens of The Village be waving National flags for?

No, the Carnival is simply another manufactured activity, the best that can be said is that the citizens are given the opportunity to dress up. Certainly Number 6’s personal maid Number 56 enjoys wearing a new dress. This seems to be a meaningless activity, because the people are simply going through the motions! They don’t look to be entering into the spirit of the so called occasion. Certainly not Number 6. But then he's the only one in the Village who is still himself! 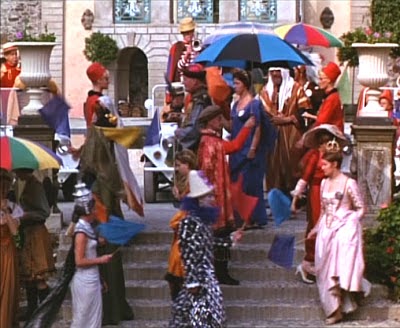 Look at them. It reminds me of some scene in a Venetian Carnival of the 18th or 19th century, save for the lack of smiling, happy faces. It would seem that it is not just the members of the Town Council who are the brainwashed imbeciles!

Be seeing you, just not at the Carnival!