No.6 the Model Citizen! by our own reporter 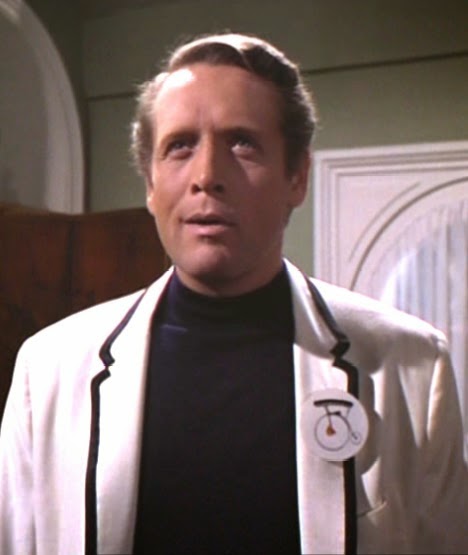 Number 6 has always had a rebellious nature, and been constantly aggressive since his arrival here in The Village. He's asked questions, refused to settle down and accept The Village. Refused to accept and respond to his number, and tried to escape on four separate occasions. But if there's one thing that can be relied upon with our friend Number 6, is his predictability, his regular daily habits which he has cultivated since his arrival in The Village. But recently his daily activities, such as daily climbing the Bell tower, perhaps he no longer likes the view, have ceased! His daily strolls around The Village etc have all gone by the board, Number 6 is not so physically active as he once was. He has not caused any trouble or aggravation, not gone looking for fights, or poking his nose in where its not wanted. His rebellious nature seems tame somehow, as though Number 6 isn’t himself!
He seems to prefer his own company to that of others, and at times is rather reclusive. But when Number 6 has been seen out and about, he has now taken to wearing a cream piped blazer with black piping. This change seems to be out of character somehow. Certainly out of character is the fact that Number 6 has now taken to wearing his numbered badge! He has not worn that badge since the day after his arrival, when having been discharged from hospital, he took it off the lapel of his blazer and tossed it into the back of the taxi, and since that day he has flatly refused to wear, or respond to his number, unless of course it suited him to do so.
When my editor told me that there had been reports that Number 6 had finally been showing signs of settling down, there being the danger of him becoming a model citizen.
What's more when I asked Number 6 for an interview he said call round to 6 Private any time. Well, the last time anyone tried to interview No.6, No.113 had to write his own interview, as all he got out of the interviewee was “No comment, or mind your own business!” Either No.6 has had a change of heart, or a change of mind, because he seems to be settling down quite nicely. This is not like our Number 6 at all, it's almost as if he's had a change of character, he seems too nice to be true!

Our own reporter
Photograph from the Department of Visual Records
Posted by David Stimpson at 08:49