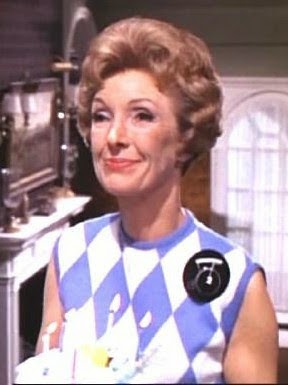 There are two types of badges worn by citizens in The Village. One of a white background, with a black canopied Penny Farthing and red numeral, and the second with a black background, with a white canopied Penny Farthing, and a red numeral - the negative and positive as I term them. However there is a third. Pictured here is Mrs Butterworth as the new No.2 in ‘Many Happy Returns.’ But note the badge pinned to her dress, a 'negative' badge, but with a 'white' numeral 2. As far as I am aware, this is the only badge of its kind, seen in the entire 17 episode series! The fact of the white numeral 2 makes this badge 'inexplicable!'
What’s more Mrs. Butterworth isn’t wearing the usual Village attire. Certainly she doesn’t wear the old school scarf, or carry about her the umbrella shooting stick, as part of her Chairmanship regalia! But then I suppose her hands are full carrying the cake!
As for Mrs. Butterworth-Number 2 wearing that diamond patterned dress, it would depend on how long she has been in The Village. Seeing as she is last seen wearing that same dress when she is being interviewed by a plains clothes police officer, or a man from Special Branch, it gives the suggestion that perhaps Mrs. Butterworth has not been in The Village long enough to change into her Village clothes. And yet on the other hand, I should have thought she would have arrived in The Village in good time, so to be on hand to greet Number 6’s arrival. Or perhaps Mrs. Butterworth is displaying individualistic tendencies by wearing her own clothes, feeling happier as herself!
As well as this Number 2 wearing both her own clothes and a different badge to everyone else, there is something rather unique about her, that makes this Number 2 stand out from both her predecessors and her successors, we know her name. Or at least this Number 2 is given a name, even though it might be as phoney as Peter Smith!