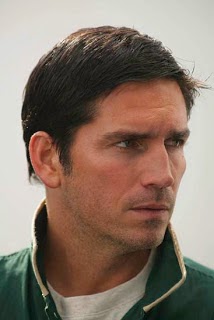 I was out for an early morning walk yesterday, when I came across this fellow lying on the beach. So thinking he'd been washed up on the shore I gave the body a nudge, and to my surprise, he was alive!
He asked me where he was, and I told him he was on the beach. "What beach?" "The Village" I said. The man stood up and looked all about him, "Where's the desert gone?" he asked. He certainly seemed confused. "What have they done with it?" "Done with what?" "The desert?" I told him there was no desert, and that if we stand here long enough we'll drown! "There's an ocean?" "There's the sea" I said "Same thing" the man replied. I asked the man who he was, to which he replied "They call me Six." What Number Six?" I asked him. "Yeah." "You can't be." "Why?" "Because we already have a Number Six." "Yeah, me" he insisted.

Well we walked together back along the beach towards The Village, and once in The Village Six seemed more confused than ever. He wanted to know where is this place? Is Two here? And what can I tell him about dreamers? "Dreamers, I don't know about dreamers. "Number Six dreams of escape I suppose," I told him I could point you in the direction of Jammers. "Jammers, what are Jammers?" "No, not what, who" I said. "I don't care about Jammers" Six said. To which of course I replied that no-one does these days!
As we strolled around The Village, Six asked me what the dome was. "The green Dome" I said "Number Two's residency" I told him. And with that Six went running off, across the square, across the street, up the steps and I never saw Six again!
So the question, which has been asked before, why does Six care? Answer, because he's in love with his own humanity, as well as being in love with 313, and 313 with him. And in the end that is what saved them both, and of course everything has its price, and their cost was The Village!
Two knows Six better than Six knows Six. Six is in love with his own humanity, he adores the smell of his own bright shining conscience. Noble Six, he only wants to do the right thing and that is what gives Six to Two when Six is faced with Sarah, 313's other self who was abused when she was a young girl, and the abused, in time, become the abusers. So to do the right thing, Six hopes to make a better Village. Six can give a better Village, a moral Village, freedom within the prison.
In the end it was not a question of escape for Six, but a matter of survival, Two knew that. Two is a master of manipulation. See how he manipulated the situation between Six and 313. Two had to hand over The Village to a successor, which had been the plan right from the beginning.
Curtis and his wife Helen volunteered for The Village because they wanted to have a family, which they could not have in the real world. But family life in The Village didn't turn out the way Two had expected. It rarely does for anyone. His son was a murdering homosexual, whose final act before committing suicide was matricide! So Two wanted to escape, escape back to his wife Helen, for them both to look forward and not back to The Village.
They threw everything at Six, loathing, love, death. With death Two thought death would open Six up to reveal the Six inside, but he was wrong, because Six continued to resist. It wasn't until Six was faced with a damsel in distress, 313, that he finally gave in to save her. And it has to be said that that has been Six's trouble all along, even with his predecessor, he never could refuse a damsel in distress!
It was difficult enough to try and convince people living in The Village that there is another place. But in New York it was even harder to convince his driver that he was living a parallel life as a taxi driver in The Village! How can you convince someone of that? And then there’s 93, the former Number 6 who is living in two Villages at the one and the same time! Perhaps in his case Number 2 in the original Village finally became tired of Number 6, and so he was brought to the new Village in order to make him better.
There are two further echoes from the original series, "Tick, tick, tick tick" as Two mimics the ticking of the clock, and the "tic, tic tic" of the new Number Two in ‘Free For All.’ As well as The Village cemetery, in both Villages people are buried in the sand. In the desert, on the beach, it's both sand!
So THEPRIS6NER series came and went, and for the majority of people, without creating a stir. However the series does live on within the DVD box set, which I watch from time to time, as I do the original series.
Will THEPRIS6NER become a cult classic as the original? It’s possible. After all it took the original series of ‘the Prisoner’ at least ten years to reach cult status.  There are two ways to describe ‘the Prisoner’ which was ahead of its time, and THEPRIS6NER which is of it's time.
Oh look Two's sofa. Does that mean the other end of the sofa is Un-Two, seeing as the '2' will be reversed? 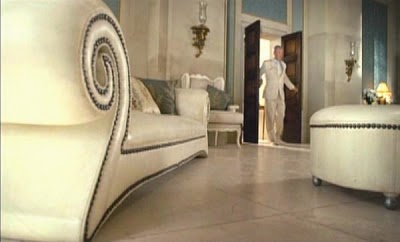 The Village may now have the feel of 1950's, but you will observe Two's futuristic lap top, the screen is made of glass - you can see right through it as Two spies on 11-12's activities. I always thought you could not die in a dream, that at the point of death you wake up just in time. 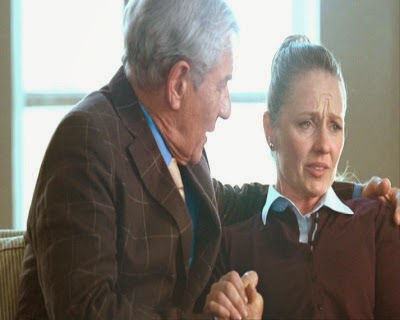 But apparently not. In the above picture we see Curtis comforting his wife Helen, who is visualising in her head, in her subconscious, her son 11-12 suffocating her with a cushion, back in the Village. Helen, or I should say M2 is lying in bed asleep, as her son 11-12 is suffocating his mother to death, and here Helen is also experiencing her own death unbeknown to her husband Curtis.