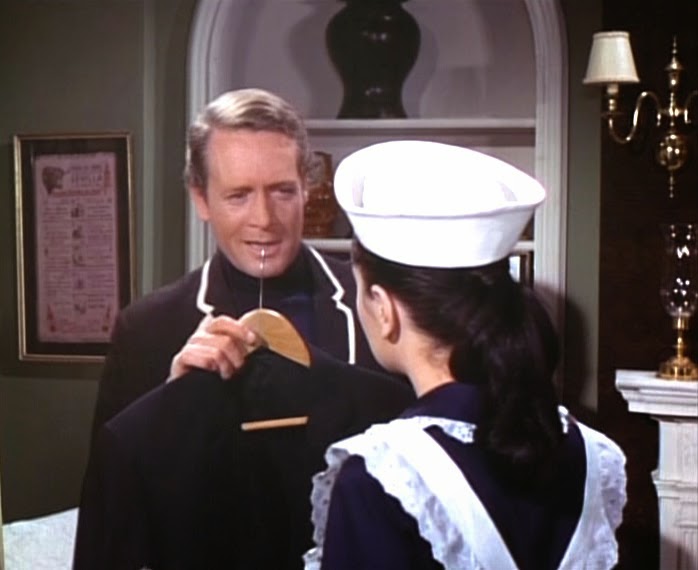 when Number 6 comes home from having spent the night on the beach, to find his personal maid flicking a feather duster about the place. It would seem that everyone is having a good time outside, Number 6 is having a laugh isn't he? They don't seem to be having that good a time at all, judging by the expressions on all their faces even though it is Carnival!
A cardboard box has been delivered to 6 Private, the maid tells him that its his costume. It seems that everyone chooses everybody else's costume for them! But its not a costume, it's the Prisoners own suit, specially delivered for the occasion. I know the doctor in 'Arrival' told the Prisoner that his old clothes had been burnt, but we shouldn't be that surprised that his suit wasn't burnt, not after seeing that hospital patient wearing it in 'Arrival.'
It would seem that the Prisoner's suit is a gauge, showing that at this precise moment he's still himself. In fact that same gauge is used in 'Fall Out,' when the Prisoner is once again presented with his own suit of clothes. "We thought you would feel happier as yourself" said the Supervisor.
As for the maid, I like her, shes a bit flighty. But she's had her new dress taken away from her, apparently she's to have a special costume for the ball. Some say its a Marie Antoinette costume. But to my eye, seeing the costume with that ruff, it's more like an Elizabeth I.

Be seeing you
Posted by David Stimpson at 08:59