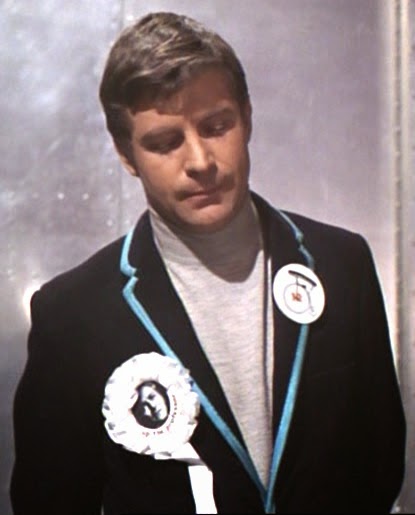 
Number 12 walks into the Board Room sporting a white rosette. In the centre is a picture of the Professor, around which in a semi-arc are the words “Up The Professor.” It would seem Number 12 supports the Professor despite his reservations about him. He thinks they are going the wrong way about the Professor. That they indulge his idiocies far too much, he’s a crank and should be treated as such. Number 12 realises that the Professor is the corner stone of Speedlearn, but at the same time Number 12 cannot help but think he’s a troublemaker, and he attracts troublemakers, meaning Number 6. And later Number 12 helps Number 6, because like Number 6 Number 12 trusts himself. First he coaches Number 6 about "what" not "when," and later he supplies Number 6 with a Top Hat official’s uniform, along with two security pass discs. In this he works  against Speedlearn and the Professor, not to mention Number 2 and the entire Village administration. And so in Number 12’s case the words “Up The Professor” take on a different meaning!