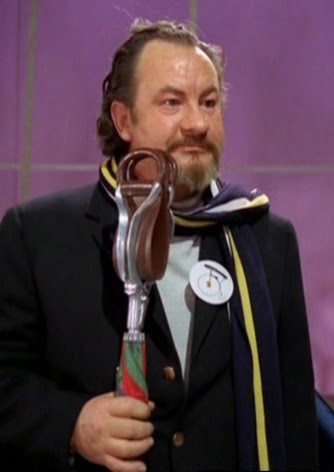 Number 2 is pictured wearing a scarf about his head and shoulders and carries about him an umbrella shooting stick. Some years ago I arrived a conclusion. Rightly or wrongly, and perhaps being guilty of reading far too much into something which is not even there, that there is a similarity of purpose between that of the scarf and umbrella shooting stick which he or she wears and carries about them. To me they resemble that of the sceptre and orb carried by the Kings and Queens of England since 1661which were created for the coronation of King Charles II. A little fanciful perhaps, however I think its a fitting idea.
And yet its not every Number 2 who we see wear the scarf and carry about him the umbrella shooting stick, and not simply because they are indoors. There are a total of five Number 2’s who do not, a sixth who doesn’t wear the scarf, but does carry the umbrella shooting stick. While two who do not wear the scarf, even when they are out and about in The Village, and one that even has his own personal shooting stick, possibly smuggled into The Village with him, for personal protection?