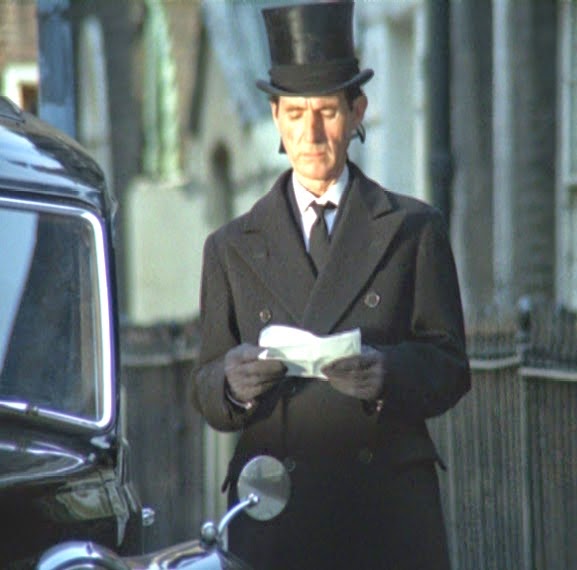 The Undertaker just checking that he's got the right man, the right address of No.1 Buckingham Place. Well it wouldn't do to get it wrong would it? So this man is an agent working for The Village. Is he also a Top Hat official of Administration for The Village? He's certainly dressed like one. If that is the case, then he and his kind must be very well trusted to be able to leave The Village. And yet that might simply be a coincidence, that this man has never been anywhere near The Village, someone who is happy to work for The Village, but who has never seen it. After all he was not in the helicopter when it arrived at The Village with the Prisoner. The Undertakers simply responsible for shipping those abducted out to The Village.
Mind you this particular Undertaker does demonstrate something No.2 once said "But they'll get me eventually. They'll find me wherever I am." And so it was with the Prisoner-No.6 when he went looking for Professor Seltzman. The Undertaker found No.6 in Kandersfled in Austria. Mind you he had it a little easy, seeing as Potter was following the Prisoner, and all the Undertaker did was to follow Potter!