A one time debutante of the 1950’s, and daughter of Sir Charles Portland of British Military Intelligence, was found dead today at a flat in London. Apparently she had been shot, by a French television producer, Joinville.
Lady Janet Portland-Lewis, 37, will probably be best remembered by readers, for having lost her fiancé, who disappeared back in the late 1960’s, after attending her birthday party in 1967. Her fiancé, whom I can only refer by name as John, worked for both Military Intelligence, and so for her father Sir Charles Portland’s department, within that service.
Janet Portland, as she was known then, asked her father Sir Charles Portland if he knew where her fiancé was? Or if he had sent him on a mission somewhere? But both questions were treated in the negative. Not knowing whether or not she could believe her father, Janet Portland went on to the police to have her fiancé declared as a missing person. But the police took a dim view of her story. That her fiancé did once come back to her, with his mind housed in another man’s body. The fact of the matter is, Janet Portland had not lost her fiancé once, but twice! Then Janet Portland tried to get a question asked in the Houses of Parliament. But for some, that was one step too far. And any further questions were smothered by official powers
It is believed that Janet Portland waited for the return of her fiancé for a second time. But a woman and her father, could wait for only so long. And so it was, that Janet Portland eventually did marry, Sir Colin Lewis, a prominent public figure, the governments Foreign Secretary, and became Lady Janet Portland-Lewis. 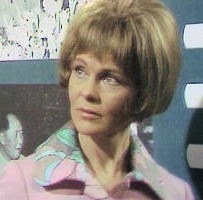 This is a more recent photograph, taken after she had been made a widow. Her husband who died from over work, was the youngest Foreign Secretary for almost one hundred years. Sir Colin knew every dirty political secret, and had told his wife, who had travelled the world with Sir Colin.
It was at this time that Lady Janet was approached by a French Television Producer by the name of Rene Joinville, who told her that he was going to make a television documentary about her husband and his life., and that for Lady Janet’s involvement in the documentary, telling the world about her husbands work, he would pay her
£10,000. The trouble was, that the British Government was getting in a twist about Lady Janet Portland-Lewis telling all that her husband had confided in her, to not only the would, but especially to the Russians! It was at this point that the ‘Section’ of British Military Intelligence became involved. Hunter, head of the ‘Section,’ assigned two agents Cross and Callan. 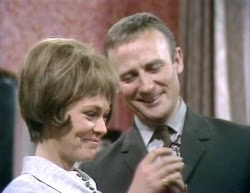 It was Callan, pictured here with Lady Janet Portland, who was given the assignment to try and persuade Lady Janet to change her mind about her involvement with the documentary.
Eventually Callan succeeded in changing Lady Janet’s mind, which in turn put her life in grave danger from Rene Joinville, who was also a Russian agent, and later assigned to kill Lady Janet using a Magnum 38 revolver, used by British Intelligence. This to make it look as though it was the British who had assassinated Lady Janet Portland-Lewis, and not the Russians. Cross, who had been keeping the apartment block, where Lady Janet Portland-Lewis lived, under surveillance, failed to prevent her death at the gun of Rene Joinville.

Be seeing you﻿
Posted by David Stimpson at 08:53