Checkmate, Two expresses his feelings for more Village. And to say "More Village" is said as though it were something ordinary, newcomers arriving in The Village. But if there is no other place, that all there is The Village, where do these newcomers to The Village come from? Well The Village!
Two being photographed by the local press on a building site of more Village houses will go down in generations of Two's family. Two presumes there will be future generations of Two's family, at least that's what he asks his son 11-12. The only problem being, 11-12 is a homosexual, and that's a bitter disappointment to Two as he tries to persuade 11-12 to unbutton himself, to enjoy life, to dance the night away with some darling girl!
Six has a choice to make, this life {Village life} or no life. In other words assimilate or die. That is the great gift of Village death, the clarity of choice. Village people choose life, but Six, well he'll find a way out before he dies {he had better hurry up, as this episode is only forty-five minutes in duration} while Two teaches Six the very secret of life "Breathe in....breathe out.....more Village" {in other words just keep breathing!} Six is dying and Two will watch him die one breath at a time, one tick of the clock at a time!
Meanwhile Sarah, 313's other self is breaking through into The Village more and more, and 313 is finding it harder to keep her out. While 11-12 still grieves for 909, his lover whom he stabbed in the neck and murdered to stop Two from finding out about his homosexual relationship with 909. But the trouble was, Two knew all the time!
Meanwhile in New York Michael's other self is taken to see Curtis of Summakor. Curtis is attempting to lure Michael back to Summakor, in fact to hand the company over to him. On the way to the Summakor building Curtis points out some of the people who have been taken to The Village and made better. People with psychological, mental, and physical problems. Made better in The Village and then returned to their other lives, and they don't even know what's been done to them, they have no memory of The Village.
11-12 suffocates his mother to death, Two prepares for Six's funeral, and 11-12 hangs himself in the 'Go-Inside' bar. A state funeral is held for 11-12 and the whole Village turns out after 11-12 has been lying in state within a venetian style coffin. Now there is only one person to whom Two can pass on The Village, and that person is Six. But he also needs a dreamer, someone who will volunteer to take the pills and remain in a heavily sedated state of mind so as to be able to dream The Village, and that person is 313.
313 allows herself to be persuaded by Two to accept his offer for the sake of Six, as she is the only person who can save Six. But also for herself, as 313 does not wish to leave The Village and return to her former life as the psychologically disturbed Sarah. As for Six, well we each have our own fears to face up to, Six's come to him in the form of the Village Guardian!
Holes are appearing in The Village, and there is only one way to try and stop them, and it's nothing to do with pigs, all we can do is breathe in breathe out more Village. Breathe in with Two, breathe out come on MORE VILLAGE!
But there's only one person who can save The Village, and that's Six, he's the one, Six is the one....we want Six, Six is the one, we want Six, Six is the one the good citizens chant following 147's lead. 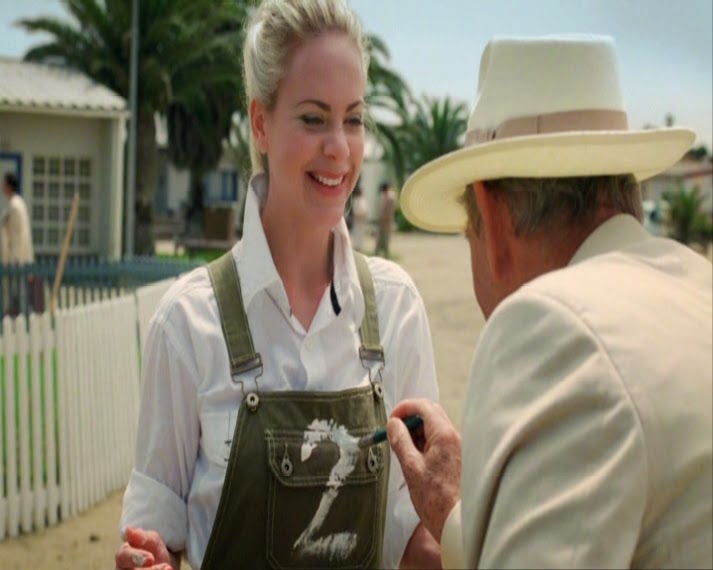 Breathe in....breathe out.....Village life goes on.
More Village when I next watch the series!

Be seeing you
Posted by David Stimpson at 09:58