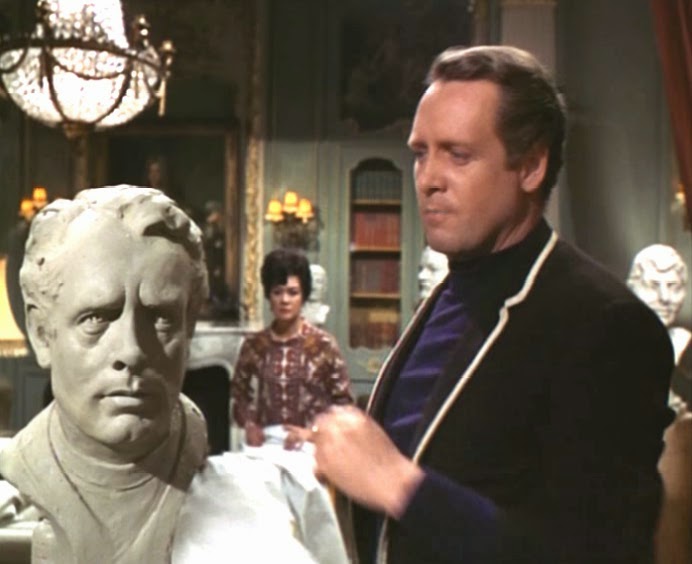 Number 6 comes face to face with himself! Well it wouldn’t be the first time, and as it happens it will not be the last. Symbolically speaking it could be said that Number 6 has unveiled himself as Number 1, or Number 2. Well Number 6 was the new Number 2, if only for a short time, and two of the other busts Number 6 unveils are those of Number 2.
I could see Number 2 during ‘The Chimes of Big Ben’ sitting for Madam Professor as she created his bust, but not the current Number 2. One would think that he had other, more important things to concern himself with, such as the educational experiment of Speedlearn than to waste time sitting for Madam Professor. However she may have played to 2’s vanity, always assuming that the busts of both Number 2’s were done from life, and not a number of photographs. As for Number 6, he didn’t even know about the Professor, the General, or Speedlearn at the outset of 'The General,' so it seems highly unlikely that he sat for Madam Professor while she worked on his bust. Unless Number 1………no, no-one knew who Number 1 was at that time. So really it does seem that Madam Professor was making studies of Number 2. And if not, why Number 6? Perhaps the bust was designed to throw Number 6, or shock and confuse the television viewer. One could ask the age old question why?