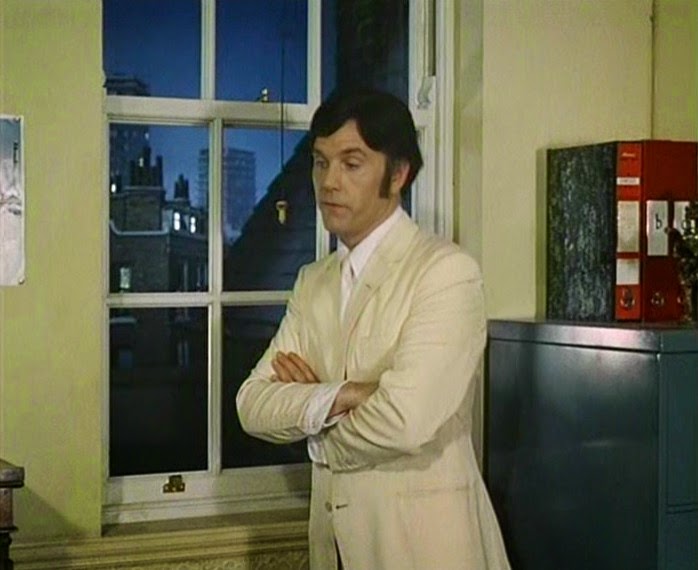 Number 2 of ‘A B and C’ said that they had researched and computed the Prisoner-Number 6’s whole life, and it all boiled down to A B and C. Well the above image would suggest that an external agency had been involved with the research, the detective agency of “Randall and Hopkirk {deceased},{a private detective series of the1960’s}. Marty Hopkirk is pictured above in the office of Randall and Hopkirk, and if you look closely at the three box files on top of the filing cabinet, you will observe that they are the same box files as used by Number 2. Two of the box files have b and c on the spines, while 'a' is missing. Obviously at this point Randall and Hopkirk are researching “A” as the box file is missing from the image.

The picture was sent to me by a good friend of mine who goes by the code name of ZM72 who is to be congratulated for his powers of observation, and goes on to say “It does open up some very interesting thoughts for people who enjoy thinking beyond what's on the screen in "The Prisoner". From a fictional point-of-view, the services of Randall and Hopkirk might have been used by the Village, before Hopkirk became deceased. Maybe the file being left out suggests the case isn't yet closed. On the other hand, perhaps they received the box from an ex-Villager, perhaps even an ex-No. 2. Or maybe they bought the folder, empty, from a sale of assets after the Village was closed down- when they were setting up their agency, they wanted to keep costs down and so bought things second hand!
Of course, none of this is intended in the story!  The truth is probably simply that the script for Randall & Hopkirk called for box files and they found it in the ITC props department. That's the rather mundane truth of the matter - fairly interesting but nowhere near as interesting as considering the fictional possibilities!”