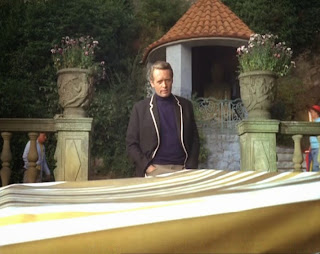 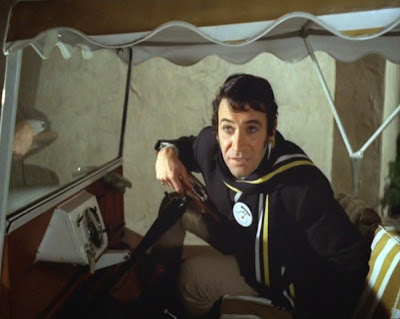 In ‘Checkmate’ when Number 6 is out and about in the Village, he’s stopped by Number 2 who is sitting in a taxi. He asks Number 6 if he enjoyed his chess yesterday. Well he might have done had he been one of the players rather than just a pawn on the chessboard, what’s more he was only moved the once! So what’s to enjoy? All Number 2 wants is for Number 6 to be happy, but all Number 6 wants is a one-way ticket home! Number 2 asks 6 if he won’t ever give up, so what does Number 2 think? Number 2 has ways, if Number 6 drives them to use  them, but such experiemts are conducted under the strictest medical supervision. Conducted by that doctor-Number 22 no doubt, a woman who like her predecessor Number 40, enjoys her work!
The conversation turns to the Rook, but he’ll come to no harm according to Number 2, it’s just a rehabilitation course. Number 2 makes it sound very attractive. Perhaps Number 6 should envy the Rook! But Number 2 can’t have Number 6 worrying, and so invites Number 6 to go with him to see the Rook at the hospital. And yet this isn’t the first time Number 6 had been invited to the hospital by Number 2 to check up on a patient. The first time was during ‘The Chimes of Big Ben’ when Number 2 asked Number 6 to join him at the hospital regarding Number 8, seeing as Number 6 had probably got to know her better than anyone since her arrival in The Village. Had Number 6 noticed any suicidal tendencies in Number 8? If not he was about to witness a staged suicide attempt from the observation room, as Number 8 is put through interrogation about her swim! In the case of the Rook, Pavlov’s experiments with dogs had been adapted to humans. In the case of Number 8, it might be interesting to know who came up with the technique of an electrified floor and a bowl of water!

Be seeing you
Posted by David Stimpson at 09:16