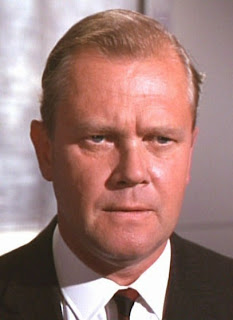 This is the first time we see the Colonel working as a field agent. Seconded to The Village to aid helping with the finding of Professor Seltznam, the Colonel had no idea in what dramatic form his help would take.
So why the Colonel, when practically anyone who worked for The Village would do? Someone like Cobb could have been brought back to The Village to take part in the mind transference. Or a citizen of The Village itself, after all, all that was required was an able body to house the mind of Number 6. That way when Number 6 had been put back in the outside World, it could have been the Colonel he would go and see and not Sir Charles Portland. In fact in this scenario there would have been no need for both characters of Sir Charles and his daughter Janet, and therefore no fiancée for Number 6!