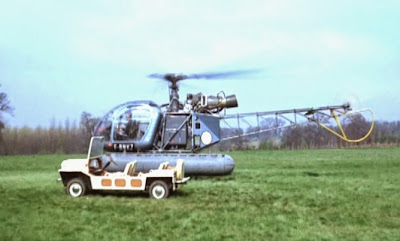 Seeing the taxi, the Prisoner gets out of the helicopter and attaches two wires to the two terminals of the helicopters battery, and the other ends to the battery of the taxi. He starts the taxi’s engine, and places a rock upon the accelerator pedal revving the engine. Then climbing back into the Alouette’s cabin, he switches on the ignition and pushes the starter button. The rotor blades now rotate quite fast. The engine coughs. 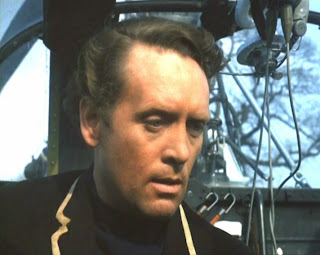 The Prisoner tries again. It almost starts. He pushes the starter once again. The battery starts to die, suddenly the engine fires. The Prisoner is wet with perspiration. He revs the engine a couple of times, then climbing out of the cabin, the Prisoner rips the wires from the battery. As this happens the helicopters engine begins to falter. Quickly he leans into the cabin and revs the engine like crazy. Still with his hand on the throttle he climbs back into the cabin of the helicopter. The rotor blades are now coming up to speed everything is fine. The Alouette helicopter begins to lift off the ground. A foot or so off the ground the engine suddenly cuts. The rubber floats hit the ground with a bump. The Prisoner pushes the starter almost frantically. The rotor blades make a half turn only. His eyes go down to the instrument panel, they stop on the petrol gauge, it still registers full. He taps the gauge with a knuckle of a finger. The needle sinks slowly back to empty. And that’s after the Prisoner breaks into the hospital, to find that building also deserted!

I'll be seeing you
Posted by David Stimpson at 07:53