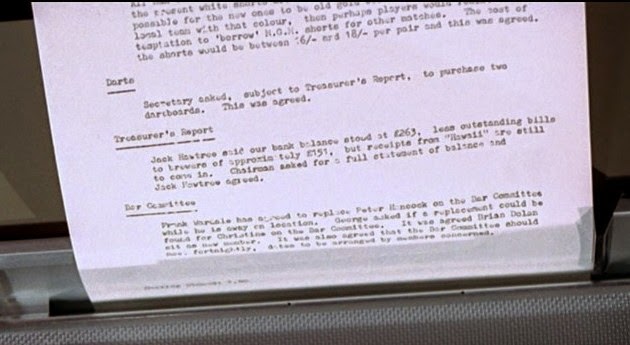 This is the sheet fed into the machine by the Professor, and it appears to have been typed up by actor Peter Howell as he sat working with a typewriter in the General’s office. Or at least Peter Howell gives the impression that the Professor typed that page.

It is a curious thing that the text on the sheet of paper is nothing more then a set of boring minutes from a society meeting! For one the secretary asked subject to the treasurer’s report, to purchase two dartboards. This was agreed. The bank balance of the society or club at the time, stood at £263, and the treasurer was Jock Hawtree.
So to what society or club might meeting might these minutes belong? A social club would be one idea, a social club at Elstree Film Studios for example. Even if that were the case, it does not explain how a page of minutes from a social club meeting managed to get itself used as a prop in a scene for ‘The General!’
Thanks go to http://www.popapostle.com/Prisoner/html/episodes/P67/The-General.htm
for use of the image.