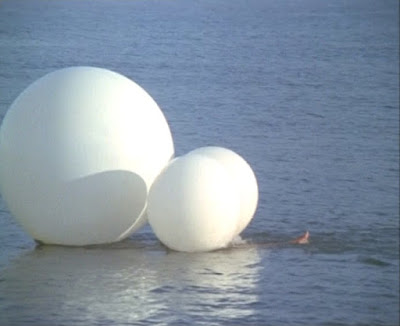 Number 8, Nadia Rakovsky, attempted to swim away from The Village. But she could not swim so far, despite being an Olympic bronze medallist. Although that was a few years ago, at the age of seventeen. And that would have been in an Olympic indoor swimming pool, and not rough swimming in tidal waters as she attempted to do in this case.
The picture shows Number 8 having been half drowned and suffocated by a Guardian, it is then aided by two smaller Guardians to bring Number 8 to the beach.
The two smaller Guardians appear to be acting as “water wings” giving Number 8 buoyancy. More than that, Nadia herself is acting as a propulsion unit, as watching the short scene carefully, you can see her kicking her legs and as she swims along!