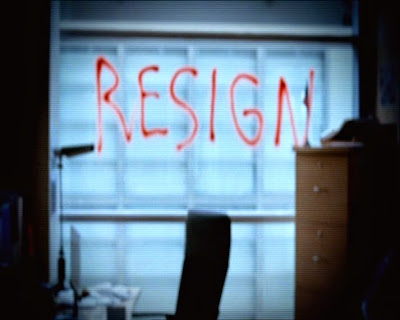 In his office of Summakor, Michael takes a red spray can and sprays the word “RESIGN” on the office window before he leaves the office. On the face of it, it would appear that Michael has resigned, although the word is resign which may be interpreted as being a suggestion rather than a statement or declaration. If Michael had resigned his job as an Observer for Summakor, it would have been more appropriate to have sprayed “I resign,” “resigned,” or “I’ve resigned” on the window.