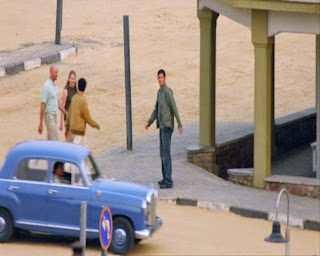 There is also someone going about The Village impersonating Two! Waht's more Ian Mkellen as two gets all the best lines throughout THEPRIS6NER, because the series was written for two and not Six, as with the original series. 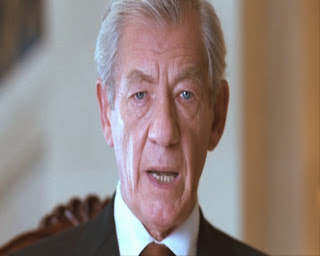 "Impersonating Two is an act of treason. In the event of a Two impersonator arising, you must seek him out and apprehend him. This man may look like Two, but you will know that he is not Two, because he is not Two. He may appear in the Village in a dishevelled state, which has resemblances to Two. He may claim to be Two, but he is not, and he must be treated as who he is, which is some one who is not Two. He is a danger to the Village."

While Un-Two enjoys the freedom of The Village! 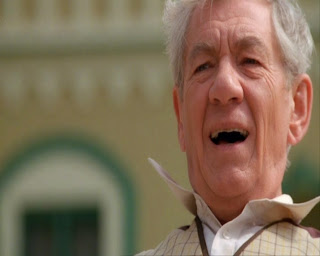 The Shopkeeper 37927 is taken to the Clinic for treatment for being a two impersonator! 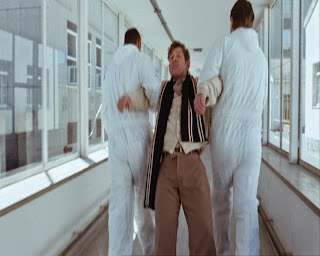 When earlier in the episode the Shopkeeper and Un-Two had enjoyed an illicit cigarette together in The Village Shop. 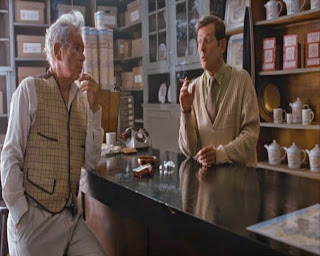 Ting-a-ling-ling sounds the shop bell as Un-Two enters the Village Shop.
"Do you have cigarettes?"
The Shopkeeper "No. But would you like to buy a map of The Village?"
"You sure you don't have any cigarettes?.....Would you look?"    "We haven't had cigarettes here for eight years and five months."
"If you don't look, how can you be really sure that you're right?"
{The Shopkeeper-37927 looks under the counter and produces a pack of Village cigarettes and a book of matches. Un-Two looks longingly at the packet. The shopkeeper unwraps the packet and offers Un-Two a cigarette and lights it. Un-Two draws long and deep on the cigarette, and offers one to 37927, and together they enjoy a guilty pleasure.}
Shopkeeper "I didn't supply you with these cigarettes."
"No."
"I don't have them. I don't even know what they are."
"No."
"I'd forgotten they even existed. You came in here to buy a map."
"I used to smoke in order to think."
"You did? Are you thinking now?"
"I am. Sometimes........"
"Yes."
"I think..........."
"Go on."
"That I could choose, there's a place I want to spend the rest of my life. A warm place...with no memory.
"Just be careful what you say around here. People will report you as soon as look at you. Don't be different."
"I wonder if we smoke to feed the guilt?"
"Speaking for myself, I smoke for that oaky flavour, with just a hint of lavender."
"These things will kill you, you know. The main health risks in tobacco relate to diseases of the cardiovascular system. In particular  myocardial infraction, diseases of the respiratory tract, such as chronic obstructive pulmonary diseases. And asthma, emphysema and cancers, in particular lung cancer, and cancers of the larynx and tongue."
"So I've heard."
"Smoking is a kind of suicide."
"That's a bit philosophical....for a Thursday.'"
{Un-Two stubs out his cigarette}
"Thank you, and I'll say good day to you."
As Un-Two leaves The Village shop the shopkeeper is on the telephone making a call to the Clinic to report his customer.
This scene is a very seductive one. The way Un-Two and the shopkeeper-37927 enjoy smoking their cigarettes always makes me feel like I would enjoy a cigarette, and I gave up smoking some twenty odd years ago!!! 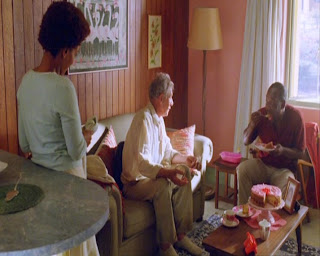 Like two, Un-Two enjoys cherry cake with 147 and his wife 23-90. They see the resemblance between him and Two, he could be a Two look-a-like, but Un-Two doesn’t have Two’s death cold eyes!
Sarah begins to impinge on 313 in The Village. Two pays homage to an old Village emblem, while 11-12 gets to spend a little time with his mother M2, but it’s not very long before holes begin to appear in The Village. 11-12 wants to leave The Village because Village is not enough for him, his mother on the other hand sees Village as being best for them!

Be seeing you
Posted by David Stimpson at 10:17