“Be seeing you” is a parting greeting used by citizens in The Village, which is used in conjunction with a salute, using thumb and forefinger to make a circle. 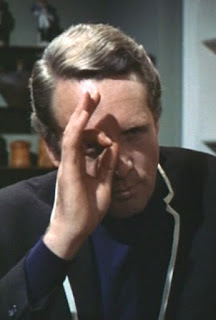 In a variety of countries the gesture has many different meanings. However Internationally it is a gesture used by scuba divers, meaning “Okay,”
I have never read, nor heard anyone say who was responsible for the idea of this gesture to be used as a salute in ‘the Prisoner,’ or how the idea of the salute came about. However as an idea of my own, during the filming at Portmeirion divers were used to release the meteorological weather balloons from below the waves at the bottom of the estuary. It is possible that someone saw the divers giving each other the “okay” gesture, and adopted it as a salute used by citizens in The Village in conjunction with the phrase “Be seeing you.”