I was of the opinion that I had squeezed THEPRIS6NER dry, and yet, having watched the episode of ‘Darling’ on Saturday night, I find there is still a snippet or two still to be found. For example…… 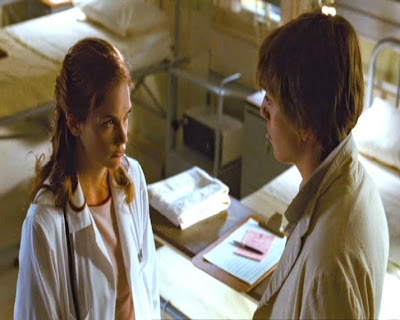 Later 313 goes to meet 11-12 in the Go-Inside bar. She tells him that the yellow pill is a sedative, a cocktail of sedatives mixed with a powerful sleeping draught. The green pill a hallucinogen, a type 313 had never come across before. It contains a compound that’s not on their records. And finally the orange pill, this is, well, this has no known contents!
The thing is, 11-12 asked 313 to have these three pills analysed. And yet the pills remain completely intact as when he handed them to the doctor in the hospital. That shouldn’t have been the case. If the pills had been analysed by a chemist it would be expected that there would be nothing left of the three pills. Or at the very least what might be left would be a little powder. But as it is the three pills look to be in their original condition. Not even a chip removed for analysis!

Breathe in….breathe out….Village life goes on.
Be seeing you
Posted by David Stimpson at 08:16