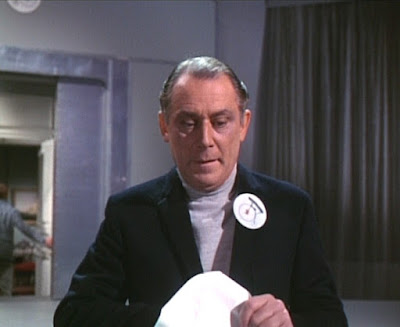 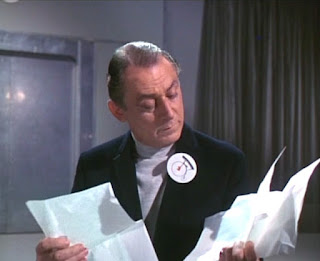 In ‘Hammer Into Anvil,’ after Number 2 and Number 14 have retrieved the large white envelope from the main cabin of the Stone Boat, left there by Number 6 only a few minutes before.
Upon returning to his office Number 2 is already beginning to tear open the envelope, even before he’s hardly put a foot into his office. Number 14 is present at this time, and is probably as eager to learn what the envelope contains as Number 2 is. However………
“I shan’t need you any more Fourteen, you can go.”
“But I thought…”
“Don’t……..just obey orders.”
“Yes sir.”
But Number 14 didn’t like being dismissed like that at all, you can see it in his face. And it isn’t until Number 14 is almost out of the office that Number 2 puts his hand into the envelope. But he pauses, there is an expression of expectation, perhaps anticipation on his face, as he is about to discover what the envelope contains………blank sheets of paper! In fact four blank sheets of foolscap paper.
Number 2 telephones the laboratory, Number 253 answers the telephone and is summoned to Number 2’s office. Upon his arrival Number 2 hands Number 253 the blank sheets of paper. He wants them tested immediately. The laboratory technician looks puzzled.
“For what?”
“Anything. Words, figures, whatever’s written on them.”
There doesn’t appear to be anything written on them, but Number 2 is not a man to be argued with! He tells Number 253 that there is, a message of some kind.
“Try everything. X-ray, infra-red, what are you staring at?”
“Nothing.”
“Then get on with it!” Number 2 barks out.
Two laboratory technicians work together in order to establish what is written on the four sheets of foolscap paper. They try everything, but to no avail, the result of all the tests is negative. And yet they appear to have failed to detect the foolscap watermark in the paper! 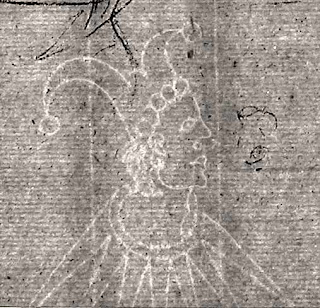 Number 242 suggests that they put the sheets of paper through the tests again. But there’s no point, they have tried everything, Number 2 isn’t going to like this.
Back in Number’s office.
“Well?”
“I’m sorry sir, but there’s nothing” Number 253 reports.
“Nothing, nothing at all?”
“No sir. They’re just blank sheets of paper.”
Number 2 snatches the sheets of paper out of 253’s hands “They can’t be! Why should he hide blank sheets of paper in the Stone Boat, or are you hiding something?”
“What do you mean sir?”
“I mean was there a message here and you’re not telling me.”
“Why should I do that sir?”
“Perhaps you’re in with him!”
“In with whom?”
“Six, Number Six.”
Number 253 looks puzzled.
“Oh you don’t know what I’m talking about, get out!”
I like the way Number 2 tells people to get out of his office. Its just a pity that ‘Hammer Into Anvil’ doesn’t follow after ‘Its’ Your Funeral,’ then Number 2 would have realised why Number 6 had left blank sheets of paper in the Stone Boat….he was jamming!