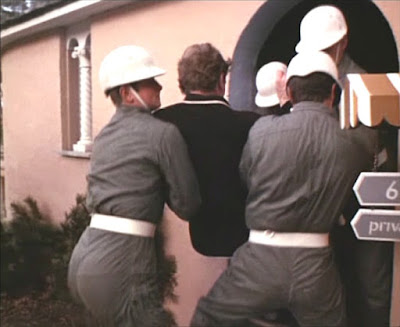 The Prisoner was once abducted from his London home. Now we witness Number 6 being abducted from his cottage in The Village! I wonder why they went to such extreme measures? You will observe that it takes four security guards to extract a struggling Number 6. Why when they could have subdued him with a blow from a truncheon? But somehow Number 6 is subdued, or sedated, as he lies perfectly still in the Red Cross trailer towed by the mini-Moke.
And yet they could have made it much easier for themselves. After all in the past when 'they' had come for him it’s usually been during the night, after Number Six had been sedated with a sleeping draught in his nightcap of hot chocolate! But perhaps on this occasion Number 6 had not drunk his nightcap, and therefore was not sedated. But on the other hand, Number 6 may well have been taken from his cottage later in the day, and therefore on this occasion the use of force was unavoidable.