Village Launch Fall Out Rocket! by our own reporter 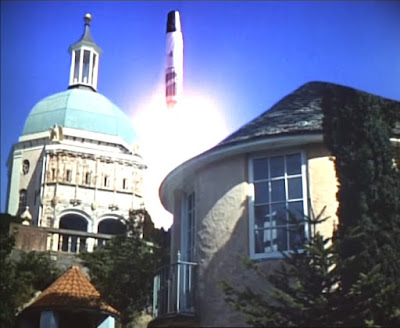 World leaders have condemned the launching of what has been termed the Fall Out rocket. England’s Prime Minister Harold Wilson said the test launching of an ICBM {Inter Continental Ballistic Missile} flies in the face of world armament agreements. Both American President Lyndon Johnson put America on DEFCON 3, while French President De Gaulle called for calm and sanctions against The Village. While the leader of the USSR, Leonid Brezhnev demanded to know how The Village acquired the technology to launch an ICBM, and accused Britain of supplying The Village with a Blue Streak missile in the first place, while at the same time placing the Soviet Union on an increased state of combat readiness!
Then the question of which side is actually behind The Village was tabled. Both east and west went silent as the question was considered. Then both sides put out an absolute denial of any such knowledge of The Village, while President Johnson asked “What Village is this?”
A radio communication was received from someone claiming to be a spokesperson for The Village, that he has a message for the World leaders, as well as the United Nations. That contrary to World belief, the rocket launched by Village technicians is not designed to carry nuclear warheads, but to launch satellites into orbit. Indeed, the Fall Out rocket carries only a small payload which has ended up in a low-orbit above the Earth. Number 1 actually confirmed that he is the payload, that Village rocket scientists had in fact launched a man into space, and that he is evidence of this. The trouble being that he is trapped in space, unable to separate the capsule from the rocket and unable to return to Earth!
“This is Number One calling Earth, Number one calling earth……..”