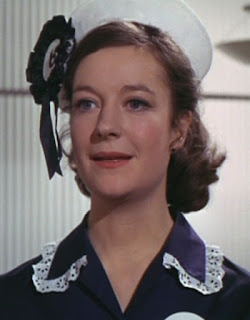 Number 58 is a maid who brings Number 6’s breakfast to him in the company of Number 2. With ‘Free For All’ being the second produced episode, this will not be the last time Number 6 has his breakfast brought to him by his personal maid {although at the time Number 58 doesn’t first appear to be all that personal} the last time will be in ‘Dance of the Dead.’ After that Number 6 will have to make his own breakfast!
According to Number 2, she may be a maid, but Number 58 used to work in records. She has a great variety of information, and a wonderful gift….a photographic memory! And he doesn’t think she’ll be with them for long. Once having given up all the information she has, then released back into Records in order to gather more information!
As the episode progresses Number 58 may grow upon us, as her attitude grows more amiable. And yet she is an agent operating undercover for The Village, as a maid, another woman whose assignment is to get close to Number 6. She has an almost continuous expression on her face, which really is at odds with everyone else in The Village.
Towards the end Number 58 who speaks a completely unintelligible foreign language, who has developed into an appealing character, undergoes a further transformation. Gone is the appealing smile, gone the cheerfulness, and gone is Number 58. Replaced by the serious, hard-hearted, vicious, unemotional, now English-speaking Number 2, who treats Number 6 with contempt.
As the new Number 2 stands on the dais in her office, everything about Number 58 has gone. And yet she played her part.