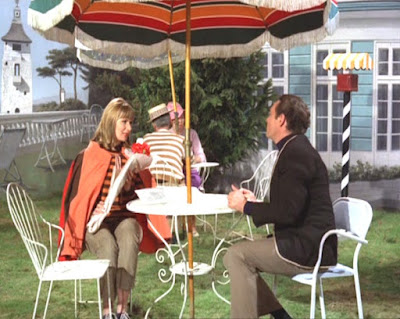 When Number 6 sees Number 14 sat at a table on the lawn of the Old People’s Home. He walks over and sits himself down.
“My handbook on social etiquette doesn’t deal with this, how does one talk to someone that one has met in a dream?”
“Look um Number……..?”
“Six.”
“Six. I’m usually a social animal, but not now. Another time.”
“Last week Number Fourteen was an old lady in a wheelchair. You’re new here…..and you’re one of them!”
“Your nonsense bores me.”
“Oh my mistake.”
“Don’t worry. We all have to make mistakes…sometimes we have to.”
I get the idea that the phrase “Don’t worry. We all have to make mistakes…sometimes we have to,” was said by Number 14 to plant it in Number 6’s mind. Because the next time he hears that phrase, “We all make mistakes sometimes we have to,” the words come out of ‘B’s mouth, but it is Number 14 who puts them into her mouth. Hearing that phrase in his dream makes Number 6 pause and consider, because he asks ‘B’ if she’s ever had the feeling of being manipulated?
I like the way Number 14 and Number 6 joust with each other sat at the table together. She knows who Number 6 is, but feigns not to know who he is, she asks for his number….?. This would be a natural reaction if she didn’t know him, because Number 6 isn’t wearing a numbered badge. But when Number 6 tells her his number “Six” it’s almost as though he’s asking a question!
Before this scene Number 14 stops at the flower seller’s stall to buy herself a bunch of flowers. The flower seller who knows everyone, who’s ill who’s getting better, it sounds as though the flower seller knows Number 14 is a doctor. But then she would, knowing everyone as she claims to do! It’s such a pity that 14 has no-one to buy them for her.