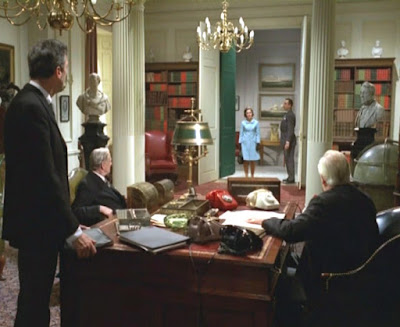 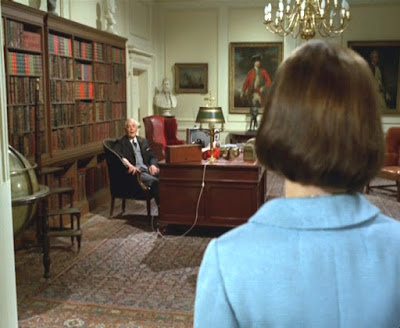 Sir Charles Portland’s office is an elaborate one. Elaborately decorated which reflects his high ranking as a Civil Servant within British Military Intelligence. Books on library shelves, a set of library steps, a large desk, comfortable armchairs, an antique terrestrial globe, four telephones, plus an intercom upon his desk. Artwork adorns the room, paintings of Generals, plaster busts {one of President Abraham Lincoln}, and two matching candelabra hang from the ceiling.
Although Sir Charles’ office is in London, and not The Village, there are certain items which are familiar to us, and seen in The Village. For example, the top painting of the sailing ship hanging on the wall in the outer office {above Janet Portland’s head} can be seen hanging on the wall in the foyer of the Green Dome. The bust in the far corner of the room is one which is seen amongst the lines of busts in The Village woods in ‘Arrival.’ And the two paintings of the Generals can be seen hanging on the wall in the Professor’s house. And there is a small framed image {in the first picture} on the wall behind the bust, such as those that decorate both the wall in the Generals office in ‘The General,’ and of the Colonel’s home in ‘Many Happy Returns.’ Finally Sir Charles elaborate office seems somewhat out of place in the stark building in which ZM73 was taken to see Sir Charles Portland. Such an elaborate office, or large study, would seem to have been better placed in Sir Charles Portland’s home!

Be seeing you
Posted by David Stimpson at 09:38