There is one thing for sure about THEPRIS6NER, that Two is dark, dangerous, and twisted! He certainly cuts a menacing figure, likes toying with a live grenade, and so twisted that he sleeps with his drugged wife. But I suppose that could be that he wants to be close to her, despite her state of mind.

‘Harmony,’ is surreally mostly in the mind, and the first time of viewing there is so much in it, it was difficult to make sense of what’s going on. And that explanation could account for the series as a whole when first viewed. So Two gave Six a brother, 16. Michael did have a brother who disappeared in the sea when they were boys, presumably he was drowned, his body carried out to sea. Two makes Six experience that again, when 16 is taken into the sea by the Guardian. It’s ironic though, that the Guardian only appears, conjured up by Six’s own fear, when he’s either going to escape, or when he’s in danger of losing someone. In this case 16, in another 4-15!
It’s not the first time the Prisoner is given a brother, he was given one in my art-house film ‘Village Day.’ But at least Two did get Six to admit to who he is.....Six, “I am Six” he shouted, and Two seemed to be pleased about that.
Surreal are both the ship’s sea anchor in the desert, along with a ship’s lifeboat. And the seemingly long deserted Village railhead in the desert. When the Prisoner first arrives in The Village, he asks the taxi driver 147 to take him to the railroad station. 147 appears to know nothing of railroads and trains. Perhaps he doesn’t know anything about the railhead out in the desert, after all it looks to be long abandoned. The desert having swallowed the rail track! 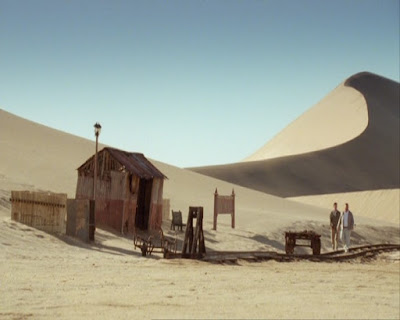 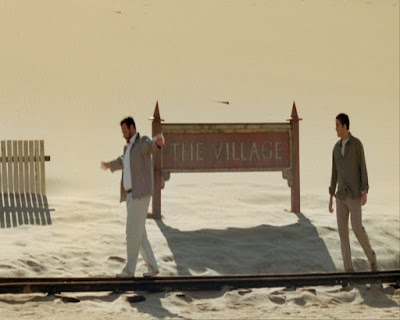 Curiously in Thomas M. Disch’s 1969 novel ‘The Prisoner’ he has a Village railroad station.
‘Harmony’ must have had a profound effect on Morag. Because she told me when we woke up, that she had been dreaming of THEPRIS6NER, and that she had been out there in the desert with that ship’s anchor. Morag, dreaming of The Village.........I had better watch out!

Breathe in….breathe out….more Village!
Be seeing you
Posted by David Stimpson at 08:24