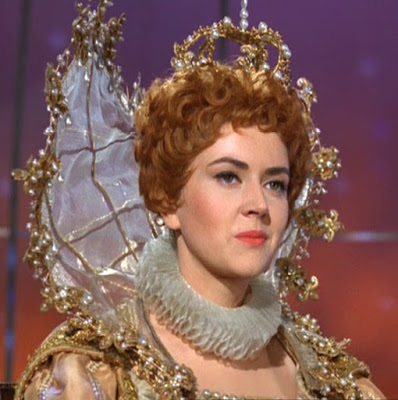 Back in the late 1980's, or it might have been the early 1990's, there was a slight difference of opinion between a number of fans as to whether the costume worn by Denise Buckley {Number 54} during the scene of the Prisoner’s trial in ‘Dance of the Dead,’ was that of Marie Antoinette or Queen Elizabeth the 1st. I have studied a number of pictures of both Elizabeth the 1st and Marie Antoinette, and only Elizabeth the 1st wears a ruff anything like that on Denise Buckley's costume. But what clinches it for me, and as my wife pointed out yesterday, is that she wears the red curly wig with her costume. And as it happens it’s rather like the actual red curly wig worn by Queen Elizabeth, when in her later years when she lost some of her own hair. Marie Antoinette's wig was a big high thing completely and utterly different, rather like the one worn by Madam de Pompadour! If anything, The Girl Who Was Death in her costume is more like Marie Antoinette!