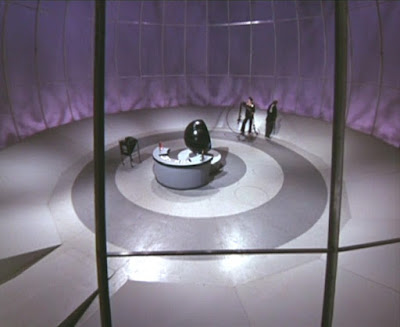 Talk about minimalism! Number 2 takes minimalism to the extreme, he’s even had the pair of Lava Lamps, seen in ‘Arrival,’ removed from his office! And that’s the whole point, the Green Dome isn’t Number 2’s residence, it’s his office. Yet all he needs is there, a desk, control panel, a separate control panel, a chair, and the wall screen. If other chairs are required then they emerge through holes which appear in the floor at the touch of a button.
Access to the office is either via the pair of steel doors, which give the impression of being blast proof doors. Or through the floor, as Number 2 is sometimes seen to arrive in his office sat in his black spherical chair. As for the floor, it’s slightly ramped around the base of the wall, and a ramp leads up to the two steel doors. The centre of the floor appears to be painted in such a manner as to resemble an eyeball! Although perhaps that’s my imagination working overtime!
The office is a domed chamber with purple coloured walls, which is illuminated from lights set high up in the dome. What’s more there is a steel framework around the chamber, which gives the effect of being a cage. This in turn, if one is symbolically minded, could be interpreted as being Number 2’s personal prison cell!

Be seeing you
Posted by David Stimpson at 08:58