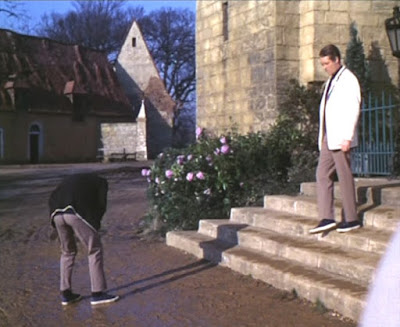 Much of the episode of ‘The Schizoid Man’ actually takes place indoors, either in Number 2’s office, ‘6 Private,’ or the gymnasium of the Recreation Hall. Only twice are Number 6 and Number 12 seen out and about in The Village. And when they are, there’s no-one else about!
However when Number 6 and Number 12 leave ‘6 Private’ for the gymnasium, they must make their way through The Village to the Recreation Hall, either by foot or taxi. So it stands to reason that someone would see them together, especially when they were in the Recreation Hall together. And it would be the same after 6 and 12 had been brawling outside the Recreation Hall, when they are herded through The Village, by the Guardian, to the Green Dome. Citizens would have seen them together. They would have taken notice. Unless something like that was not so unusual. What is unusual is the fact that the pair of 6’s submitted to the Guardian. They could have made a sudden run for it, in opposite directions, because Rover couldn’t have pursued both of them! Ah, but then it was only Number 6 who was under escort, not only by Rover, but by his doppelganger!
As for citizens seeing two Number 6’s together, seeing how The Village had more than its fair share of doubles, doppelgangers, twins, and look-a-likes, perhaps to see a pair of identical 6’s would not appear so out of the ordinary after all!

Be seeing you
Posted by David Stimpson at 10:04