A Favourite Scene In THEPRIS6NER 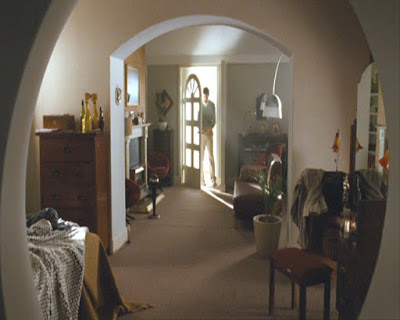 When Six, having found 93’s apartment, he makes a search of it. What exactly he is looking for is unclear. However there is something familiar about 93’s apartment. Perhaps it’s the impression given by both the door, and that circular arch. Not to mention the fire place just inside the door, and the arched free standing lamp. And of course the two Lava Lamps, modern day ones admittedly, as well as the writing bureau.
In an empty bottle of Village wine Six finds a drawing of St. Stephen’s Tower in London, but known by most people as Big Ben, but which in 2012 was renamed Elizabeth’s Tower to celebrate Queen Elizabeth II’s Diamond Jubilee. The drawing of the Tower is suggestive of 93’s former life in London.
Then Two, along with his son 11-12, and his bodyguards enter 93’s apartment.
“Can you see Six, how I might wonder why you’re here if, as you claim, you know nothing about Ninety-three?”
“I came here to find out who this man Ninety-three is.”
“And now that you are here……… do you see what he was? A drunk, a fool.”
“Maybe he drank because he found the lie of this place unbearable. He knew what I know, The Village is not all that there is.”
“What is it you are suggesting? A hole in the sky, aliens landing secretly in the night. Mysterious roads that lead beyond, beyond, a magic gateway perhaps, some portal leading into never never land. Take a look outside Six, people going about their lives, strolling in the sun, sitting together in the park or anywhere where they might choose to sit together. Take a scooter ride, go dancing, a joy while they gaze about The Village….contented…hopeful. Everyday above ground is a good day. The problem…is in your mind.”
“Well, I want out.”
“You’ve tried that, there is no out ……. there is only in! You can go on tormenting yourself if that’s what you want, or you could stop.”
“If Ninety-three were no more than a drunk, a fool as you say, then why were they chasing after him, shooting at him? Because Ninety-three found something, and if he can do it, I can.”
“I pity you Six, you refuse to open your mind to the possibility that you’re wrong.
“If I open my mind, you’ll take it away from me.”
“We might…… but we will always give it back!” 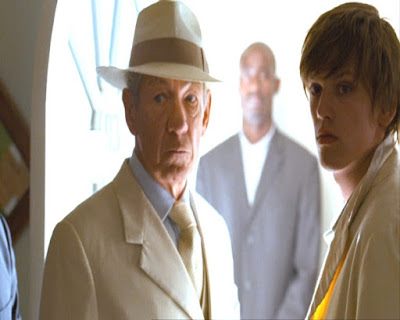 Jim Caviezel’s Six is more subtle than that of Patrick McGoohan’s Number 6. Indeed in character they are poles apart, and that is the way it should be. However Ian McKellen is perfect as Two who has the better lines, seeing as THEPRIS6NER was written for Two rather than Six. Unlike the original series, which was all about Number 6!

“Take a look outside Six, people going about their lives, strolling in the sun, sitting together in the park or anywhere where they might choose to sit together. Take a scooter ride, go dancing, a joy while they gaze about The Village….contented…hopeful.”
I like the way Two makes The Village sound such an attractive place to live!

Breathe in…..breathe out….Village life goes on.
Be seeing you
Posted by David Stimpson at 10:07