Once when watching ‘Arrival’ of THEPRIS6NER, Morag suggested that perhaps 93, the old man out in the desert and mountains being shot at, and chased by armed guardians, "Perhaps Number 6 wasn't important to The Village authorities any more. And so was demoted in number, from 6 to 93.” To understand this, readers must be aware that production designer Michael Pickwoad said of 93, that he is a representation of Number 6 of the original series. 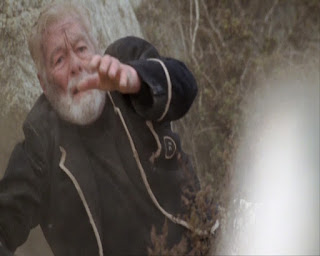 In The Village, the more important you are in The Village rankings, the lesser the number, such as Two who was second only to 1. Take Number 245 for example, he was a guardian, a "school prefect" in The General. 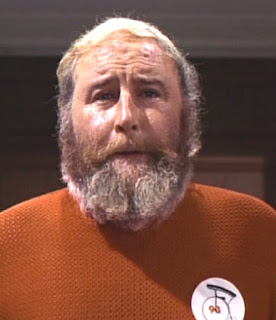 Yet by the time of ‘A Change of Mind’ he had risen in the ranking to 93, but at the same time had become a disharmonious "unmutual." But obviously his confession was so good for his soul, that he maintained that number, and was even given a position as one of the delegates sitting on the assembly. So the lesser the number the more important one is to The Village authorities, and the greater the number the less important one is, and finally to be retired into the Old People's Home. And once you've been re-allocated a new number, your former number can then be re-allocated to a new arrival - Six perhaps!
Footnote: If it wasn’t for the production designer saying that 93 is a representation of Number 6 from the original series, I might have thought the old man 93 might be a representation of the 93 of ‘A Change of Mind.’ It’s the close croped white hair and the beard I suppose, they are suggestive!