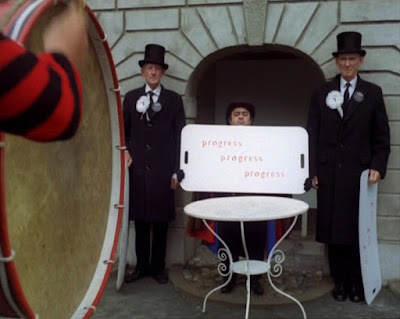 We know what we must do….what must we do? Progress, progress, progress! What a lot of palaver over nothing! All that effort of the election period and at the end the electorate behave as though nothing had happened. Number 6’s words rang richly in the electorate’s ears, because everyone voted for him, little good it did. Well it didn’t do Number 6 any good at all. He thought he had won when there was no chance of him winning at all. They treated democracy, the freedom of local election as simply part of the game.
As for myself I took little part in the election, appearing holding up the vote and progress boards, and again holding the umbrella during my master’s final election speech on the hustings. One last thing, I pride myself that I was the only unbiased individual person during the election, not to wear a rosette in support of either candidate. I suppose that could be interpreted as my being the one percent “don’t know” vote! So I abstained from voting, as neither candidate impressed me. Because to me Number 2 is Number 2 no matter who it is. Didn’t Number 240 of ‘Dance of the Dead’ once accuse Number 6 of wanting to spoil things? Isn’t that just what he attempted to do after the election. In trying to organise a mass breakout, thus trying to spoil things, by telling the citizens that they are free, free, free to go!

Be seeing you
Posted by David Stimpson at 09:03