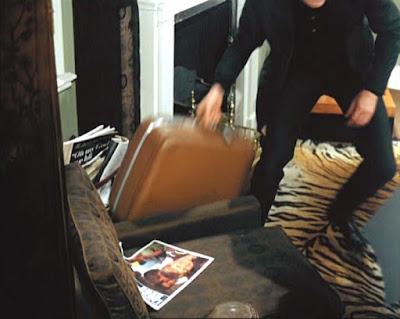 ZM73 has returned to his house having handed in his letter of resignation. But he’s eager to get away, perhaps he’s expecting them! As he reaches for the first of the two suitcases secreted by a chair, in that chair is a copy of ‘The Illustrated London news. 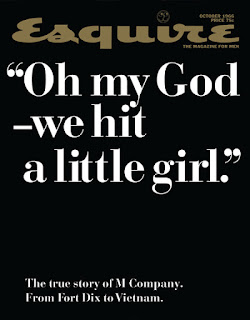 More than that, in the Canterbury by the wall and fireplace, a copy of ‘Esquire’ magazine can be seen. The magazine, dated October 1966,memorable for its famous cover headline “Oh my God – we hit a little girl,” a legendary account of one company of American soldiers in Fort Dix, New Jersey, who trained for war and who found it in South Vietnam fifty days later.” The cover refers to the article inside the magazine titled "M" by John Sacks, about M Company, an American army unit in Vietnam during that country's civil war. The article tells of one of the company's soldiers throwing a grenade into a Vietnamese hut. Too late finding out a 7-year old Vietnamese girl was inside. Killing her, eliciting horror and grief from the soldier at what he had unknowingly done while following orders. The following excerpt is taken from that article.
“Then it was that the incident happened. A cavalryman, seeing a sort of bunker place, a hut above, hole below, and hearing some voices inside it, told Demirgian to throw a grenade in. Dermirgian hesitating, a soldier we have met before, though not by name, jumped from his APC and flipped in a hand grenade himself. It rolled through the door hitting a sort of earthen baffle before it exploded, and ----- gasped as ten or a dozen women and children came shrieking out in their crinkled pyjamas: no blood, no apparent injuries, though, and ----- got onto his carrier again, it continued on. The next APC in the column, with Yoshioka aboard, drove up to this hovel, and a Negro specialist four, his black rifle in his hands, warily extended his head in, peering through the darkness one or two seconds before he cried, "Oh my god!"
"What's the matter," said a second specialist, a boy on whose machine gun Yoshioka was assistant. “They hit a little girl" and in his muscular black arms the first specialist carried out a seven-year-old, long black hair and little earrings, staring eyes—eyes, her eyes are what froze themselves onto M's memory, it seemed there was no white to those eyes, nothing but black ellipses like black goldfish. The child's nose was bleeding—there was a hole in the back of her skull. "Sir,” said a cavalry sergeant, his thumb on the press-to-talk switch of his olive drab radio, his captain on the line, "Sir, there's a little girl, a civilian girl, who is wounded. Can we have a dust-off?" The sergeant hoped for a helicopter to bring the gazing child to one of Vietnam's cluttered civilian hospitals, where the patients lie three to a bed with weird afflictions like missing arms and legs and holes in parts of their bodies. "Roger," said the cavalry captain, but then the seven-year-old shuddered and died. "Sir," said the cavalry sergeant, "The little girl died.”
Such are the discoveries still to be made within ‘the Prisoner,’ a series which almost 48 years after the event, still has the power to surprise!