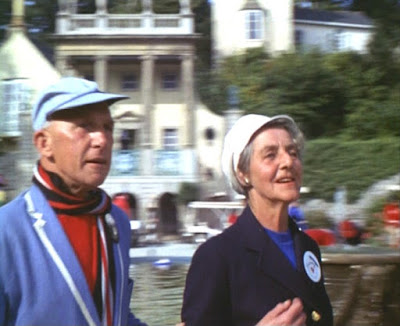 Apparently this elderly couple didn’t settle for ages and now they wouldn’t leave for the World. So what was it that brought them to The Village? Did they come together, like the Professor and Madam Professor, and of their own free will? Perhaps they met in The Village and decided to make a life for themselves. At any rate they seem perfectly happy, Village life seems to suit them.
That’s a yachting cap that chap is wearing. He might have been a yachtsman in his former life. Perhaps he was a yachtsman sailing around the World with his wife, whose yacht was caught in a storm at sea, and dashed to pieces on the rocks, their unconscious bodies washed up on the shore. And therefore found themselves in The Village. They of course would not be allowed to leave no matter what the circumstances, hence it would take them ages to settle down to Village life.