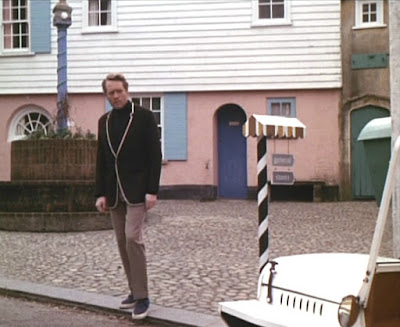 That’s handy! A Mini-Moke has been left standing idly by, so it seems, quite deliberately. What’s more the key is in the ignition! But simply driving away from The Village appears to be impossible. But the Moke is a donkey, and so is put to work towing tree trunks out of the woods and down the slipway.

Then we come to the question of the General Stores. Was that emporium, like the Mini-Moke, left deliberately unlocked? Or did Number 6 have to break in? Either way access was gained by Number 6, and from there he provisioned his raft with the vitals he needed. He also took a packet of darning needles, a copy of the previous day’s The Tally Ho, Cannon 35mm Dial camera, and a loudspeaker. And for all this he wrote an I.O.U for 964 Work Units and signed it No.6? on the counter. Why did he do that? There was absolutely no need for him to write that I.O.U, because as far as he was concerned he wasn’t coming back, well certainly not as a prisoner! And yet when Number 6 wrote that I.O.U by signing it No.6? he’s still questioning his Village identity, even in the middle of his escape!
When the shopkeeper went to the General Stores the next day, he’d find the I.O.U, and no doubt he reported the missing items to Number 2. Upon Number 6’s return to The Village, I wonder if those 964 Work Units were debited from his credit card! I like to think they probably were.

Be seeing you
Posted by David Stimpson at 10:00