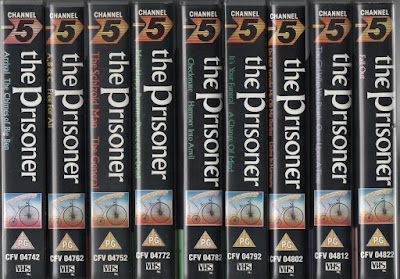 Yesterday I was out and about the town, when my wife and I called into one of the several charity shops. Instantly upon entering the shop, my eye was caught by ‘the Prisoner’ videos set on the DVD and video shelves. Their design is distinct, so much so that they do stand out, and to my mind they are the best designed sleeves for ‘The Prisoner’ on either video or DVD since 1986.
Why did I buy them, when I already have this set of videos? Simple, I could not resist them, and I felt exceedingly happy having done so. Oh I did for a short time. I was talking about them in the shop with the shop assistant. She asked me if I was going to buy them, but I resisted, saying that I already have the set, and my wife would frown upon me should I buy them. Eventually we left the shop, and in the shop next door I asked my wife if I should buy ‘the Prisoner’ videos? She said that it was up to me. I wasn’t sure, but after a few moments thought, I found myself thinking if I don’t go back and buy them I will regret it for the rest of the day. So leaving that shop I returned to the charity shop, the assistant asking are you going to buy them? I said yes. So my wife knew I would buy ‘the Prisoner’ videos, the shop assistant knew, and so did I. The price? 49 pence per video, which is a damned sight cheaper than when I bought my set in 1986-87, then they were £9.99p each, almost £90 the set.
Back in November 1986 is when I purchased the first two videos covering ‘Arrival’ to ‘Free For All.’ And the rest were subsequently released two videos at a time, save for ‘Fall Out.’ over the ensuing months of 1987. And I was impatient to collect the rest, impatient that I should not miss the next release. So I would call into W.H. Smiths once a month to enquire about them, and while I awaited the next two videos I watched the first two videos over and over again. What’s more, although they have not been re-mastered in anyway, the Channel 5 videos still play as good today as they did back in 1986.