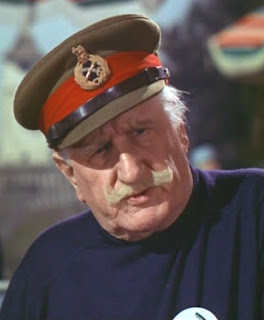 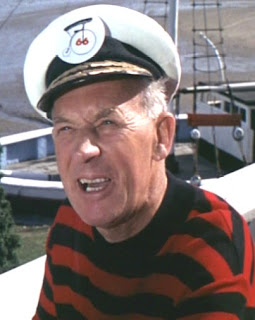 Number 66 was described to the Prisoner as an ex-Admiral. What could it have been that saw his rank stripped from him? An act of treason, the loss of a sea battle, or the loss of his ship? Whatever the reason, it was obviously reason enough not only to strip him of his rank, but also to incarcerate him in The Village for an undisclosed number of years. His being an ex-admiral may well be the reason why his cap badge is covered by the numbered Penny Farthing badge. Unlike the General who managed to retain his rank. His army cap badge is on show for all to see, wearing his numbered Penny Farthing badge pinned to his jersey.  However the question that applies to the ex-Admiral equally applies to the General. What did he do to see himself brought to The Village? Because stripped of his rank or not, his situation is equal to the Ex-Admiral, he’s a prisoner in The Village! Besides what is rank to a prisoner, no rank at all, it doesn’t make no difference! All that’s needed is a Royal Air force Group Captain, and there would be the full set!
It’s difficult to make up one’s mind about the Group Captain of ‘Many Happy Returns.’ He was assisting ZM73, along with others, to calculate the search area for The Village, and he did manage to organise the refuelling of the Gloster Meteor Jet aircraft at RAF Gibraltar. However when the Colonel and ZM73 left the Kitting Out room, the Group Captain did hang back, and was still there when the milkman entered the Kitting Out room. What is far from clear is, did the Group Captain assist the milkman into his flying suit, or was the Group Captain overpowered, and rendered unconscious by the milkman? If the Group Captain was an aid to the milkman, then he would still have had to have been overpowered by the milkman and rendered unconscious. Because when the Group Captain was found, he would have some embarrassing questions asked of him. And being found unconscious in the Kitting Out room would certainly give credence to any story he told to both the Colonel and Thorpe.  It might be said that the jury is still out on the group Captain, even after nearly 48 years!

Be seeing you
Posted by David Stimpson at 09:35