A favourite Scene In The Prisoner 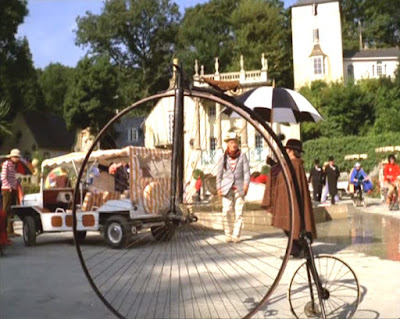 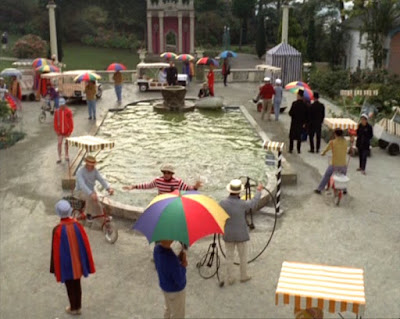 A favourite scene takes place on the day of the Prisoner’s arrival in The Village, when after Number 2 and the Prisoner take a taxi ride from the Old People’s Home stopping outside the Town Hall, they part and got their separate ways. Number 2 makes his way to the Gloriette, while the Prisoner………
The brass band emerges from the pink pavilion playing the Radetzky March. The Prisoner is passing by at the time, but pauses to look up at Hercules with the World on his shoulders, and his lion skin wrapped about him.
It’s another beautiful day, but suddenly there are two announcements and your attention is required. “Ice cream is now on sale for your enjoyment. The flavour of the day is strawberry. Here is a warning! {that grabs the Prisoner’s attention} there is the possibility of light intermittent showers later in the day. Thank you for your attention.”
The Prisoner makes his way across the lawn and onto the Piazza where people are promenading around the pool and fountain, as well as taxis driving around the piazza. A chap in a boater collects his penny farthing bicycle and gives a salute to the Prisoner. There’s a chap in a dark blazer and straw boater sitting in a dinghy in the pool of water by the fountain. An elderly couple pass by and greet the Prisoner.
“Beautiful day.”
Number 2 tells the Prisoner from the Gloriette using a megaphone that they didn’t settle for ages, now they wouldn’t leave for the world!
Also in the pool two men are fighting, and a chap is riding a tricycle. One chap is riding a garden tractor, while elderly citizens are pushed along in wheelchairs. Citizens riding bicycles with the addition of a candy striped canopy, the same as the taxis. The people sat in those wheelchairs are wearing colour tinted visors, and some of the citizens promenading have their colourful striped umbrellas open. Either expecting rain, or simply employing them as parasols for protection against the sun. And two men in black top hats, black suits, and overcoats carrying black leather document cases pass through the Piazza. These are two men of The Village’s Administration, not the pair of Undertakers who abducted the Prisoner from his home!
Suddenly an order issues from Number 2 “Wait, wait, be still!” And everyone stands stock still, even the Prisoner, and even the fountain stops operating!
And then a small white amorphous sphere appears on the waterspout of the fountain. Then, in the blink of an eye, its much larger and on to of the Gloriette.  Young man in a hat, sunglasses and a striped jersey suddenly emerges from the pool of water and runs about. He is told to stop by Number 2, the young man ignores him. Number 2 orders the man to turn back. But then the white amorphous sphere is upon the young man in seconds, covering his face, suffocating the life out of him. And then it’s gone. The Prisoner asks Number 2 “What was that?” Number 2 tells him that that would be telling!
Then an announcement over the public address system, apparently the Labour Exchange is now ready for him. Number 2 will be right there, and proceeds to direct the Prisoner to a sign which points the way to the Labour Exchange. There’s the ex-Admiral floating a plastic boat in the “Free Sea.” The electric’s Truck parked up. Then the sign pointing to the Citizens Advice Bureau, and then the Labour Exchange. Number 2 eventually meets up with the Prisoner by a tall hedge.
“Well how do you like it? he asks.
“Charming” the Prisoner replies.
The Prisoner finds The Village Charming, and so do I.
Be seeing you
Posted by David Stimpson at 09:01