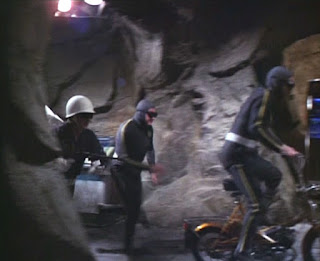 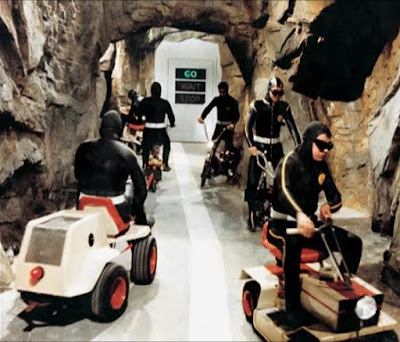 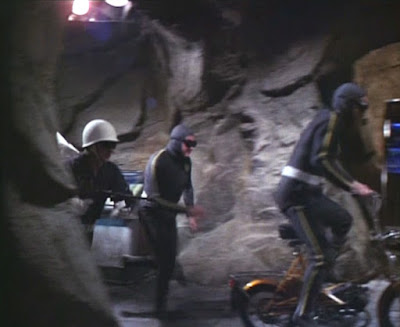 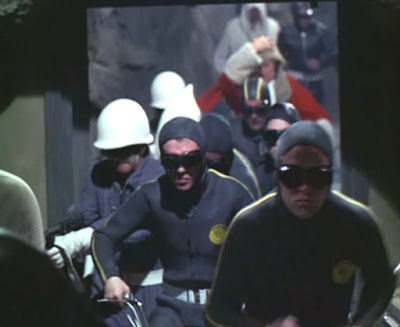 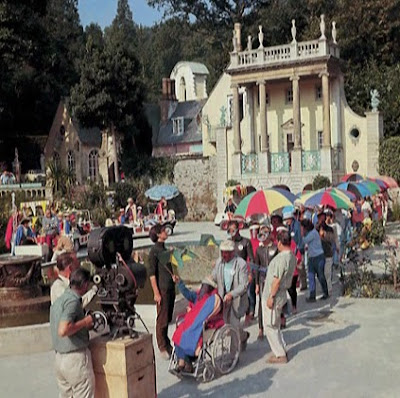 The first picture is a production shot with frogmen in wetsuits riding Raleigh Whisp mopeds, garden tractors and a lawnmower. It’s a surreal scene which was never used in ‘Fall Out.’ We know that because of the different door, equipped with the traffic light style lights, at the end of the tunnel which leads through into the cavern beyond.
The second and third pictures are taken from ‘Fall Out’ during the evacuation of the cavern because of the impending launch of the red 1 rocket. And the final picture is again a production one, taken during the filming of the Carnival parade in ‘Dance of the Dead,’ yet two frogmen can be observed taking part in that parade. They can also be seen in the actual parade in the episode.
So why the frogmen in wetsuits? The two seen in the Carnival parade could be the divers who released the Village Guardian from the bottom of the sea. Why the frogmen seen during the evacuation in ‘Fall Out,’ is anyone’s guess. However they are all wearing the yellow insignia of a diving club on their wetsuits. Unfortunately I’ve not been able to discern the name of the diving club. Perhaps someone with ‘the Prisoner’ on Blu-ray might discover the name.

Be seeing you
Posted by David Stimpson at 09:15